If you’re not freaking out, your not paying attention.

In support of the “Internet-Wide Day of Action to Save Net Neutrality,” more than 80,000 websites displayed banners, alerts, ads and short videos to urge the US public to oppose the overturn of the landmark 2015 net neutrality rules.

If you value the internet and like it the way it is, you may be in for a bit of shock in the coming months, if the current US President and the FCC get their way. 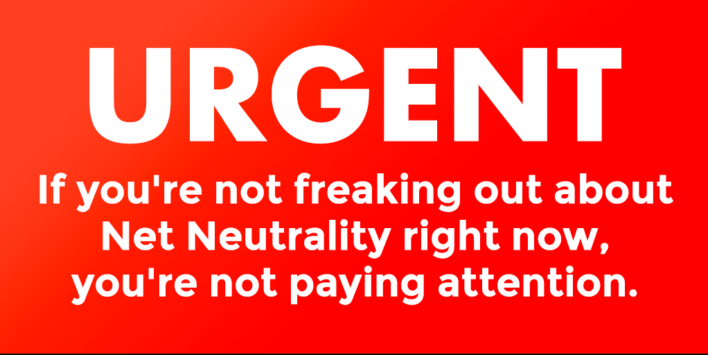 Seriously, you should probably be concerned, that is the message from Battleforthenet.com. If you’re unsure, their arguments are fairly compelling.

The rules which have been in place since 2015, forbid Internet service providers from creating paid “fast lanes” or giving special treatment to one website over another. The rule was implemented by the Obama administration in 2015. Proposed changes to these rules, spearheaded by the current chairman of the FCC, could see internet users having to pay more to use certain websites on the web, such as Netflix, or stop you using them entirely; effectively creating a two tier internet for millions of American citizens,  so broadband suppliers can charge extra fees to control what web users see and do online.

Put simply, Net neutrality is the principle that Internet providers like Comcast & Verizon should not be allowed to control what users  see and do online. In 2015, startups, Internet freedom groups, and 3.7 million commenters won strong net neutrality rules from the US Federal Communication Commission (FCC). The rules prohibit Internet providers from blocking, throttling, and paid prioritization—”fast lanes” for sites that pay, and slow lanes for everyone else.

Changes to the current  rules are being proposed by the head of the US. Federal Communications Commission (FCC), Ajit Pai, appointed by President Donald Trump in January. “Net Neutrality is foundational to competitive, free enterprise, entrepreneurial market entry… anyone with a great idea, a unique perspective to share, and a compelling vision can get in the game,” wrote Lauren Culbertson, public policy manager at Twitter. 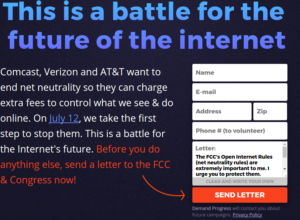 If you live in the US you can do your bit to keep the internet fair and equal for everyone who uses it. Click here to find out how.

Protests are likely to end in failure

Despite Wednesday’s day of action for net neutrality, and virtually all public opinion polls indicating that the majority of US consumers on both sides of the political divide are in favor of the Obama era rule change, the campaign to preserve net neutrality seems like an inexplicably long uphill struggle.

The FCC’s current chairman, Ajit Pai, is a Republican ideologue. Pai argues that the idea of net neutrality amounts to undue regulation that hurts business. As a Republican, he has the majority of votes on the FCC, and seems set to destroy the current rules late in the summer. “Do we want the government to control the internet? Or do we want to embrace the light-touch approach,” said Pai, in April.

Facebook CEO Mark Zuckerberg wrote on his social media platform that “right now, the FCC has rules in place to make sure the internet continues to be an open platform for everyone. At Facebook, we strongly support those rules.”

Pretty much all the the major broadband providers in the US, including AT&T and Verizon Communications (who Pai once worked for…) have been forced to acknowledge the public support for net neutrality, but have also made clear that they oppose the 2015 net neutrality reclassification order as they claim it could lead to full scale government regulation. Phew, for a moment there I though it was just an opportunity for them to throttle people’s bandwidth and lmit access to the entire repository of human knowledge, and cat videos.

More than 550,000 comments have been filed with the FCC in the last day (at the time of writing) with the FCC. Overall, the FCC has received more than 6.3 million comments to date.